As one of the leading American newspapers, our Washington Post newspaper archives allow you to find a back issue you’re looking for, or make a fascinating, nostalgic gift for a loved one. Whether it’s for a birthday, anniversary, or other special occasion, you can select the date of your choice to see what big news stories were published on that particular day.

For an avid reader of the Washington Post, or someone who loves history, our Washington Post back issues are genuine original newspapers that let your loved one read some of the top news events from the past. With thousands of copies in our archive, see what interesting dates are available. 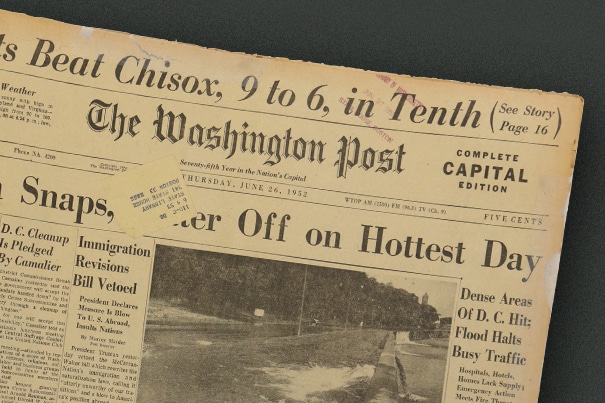 This major American newspaper is published daily in Washington D.C. in broadsheet format. Editions are also printed for the District of Columbia, Maryland and Virginia, giving the newspaper wider readership. So far, the newspaper has won 47 Pulitzer Prizes since being established in 1877.

With a daily paper circulation of 356, 768 as reported in 2015, the newspaper continues to be one of America’s leading news publications. The best-known aspect of the newspaper’s history was their reporters Bob Woodward and Carl Bernstein leading the American press’s investigation into what is now known as the Watergate scandal. Their reporting contributed significantly to the resignation of President Nixon. You can discover even more top stories by exploring our Washington Post article archives.