Wall Street Journal back issues give a remarkable insight into the nation’s history, since they show how the newspaper has reported certain events throughout the 20th and 21st centuries. By selecting the date of your choice, you can see what big news items were featured in the paper at the time and what events were capturing the attention of the American public. Exploring Wall Street Journal opinion archives can help you find an unusual, nostalgic gift that will take your recipient right back to a day memorable to them. With thousands of old copies available, you can be sure to find the date you’re hoping for. 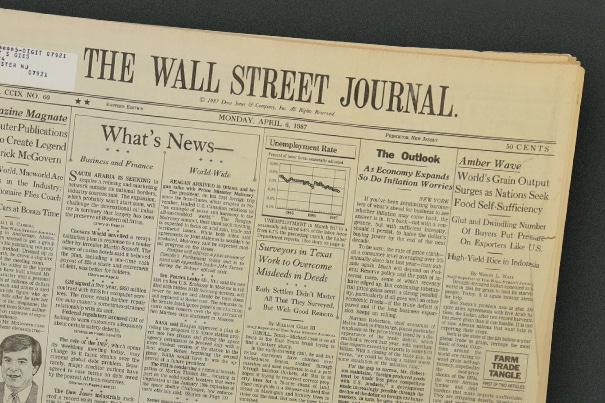 The Wall Street Journal is a New York City based daily newspaper, focusing on business and printing internationally. It’s published six days out of the week in the broadsheet format, and has been printing continuously since it was established in 1889. The Wall Street Journal is one of the largest newspapers in the United States by circulation, with about 2.83 million copies as of August 2019. It has won 37 Pulitzer Prizes and is known for its award-winning news coverage.

The quality of the cover and the gift…

The quality of the cover and the gift box makes the gift seem extra special.

I totally love my new Table book. I’m learning so much from it. Great quality!

The product was exactly what I hoped it would be. The extra fee for the gift box and packaging was very worth it. Their customer service was extremely polite and went the extra mile helping to work through delivery issues with UPS. (UPS will NOT receive quite a favorable review, I assure you) Superior product, excellent support. Will definitely order from them again.

Such a great gift idea

Such a great gift idea! The book was bigger than I was expecting and great quality! I can't wait to give it to my dad for his 70th birthday.

I have ordered multiple times with multiple papers in each, and everything was as advertised, beautifully packaged and arrived without incident. Ordered as Christmas gifts so I can’t wait to see the recipients reactions.

Amazing product and great customer service. I am 100% satisfied.

This is a beautiful book with newspaper articles from the Vietnam War. My Father is going to love it.